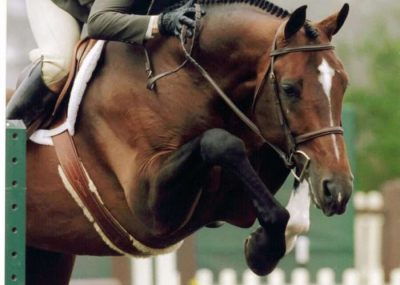 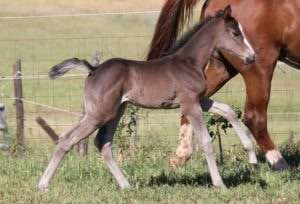 Ragtime’s offspring have carried on his winning ways. Ragtime continues to pass on his athletic ability, excellent conformation and wonderful temperament to his
offspring. For many years Ragtime’s foals have been branded Premium at their ISR/Oldenburg inspections. Many have been champion at their inspections. 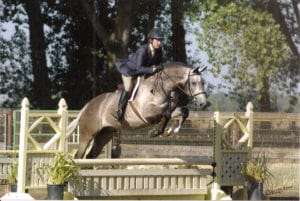 As Ragtime’s offspring have moved into the performance ring, they have again followed in Ragtime’s footsteps with many of them earning championships and top year end awards in the Pre-Green, First and Second Year Working Hunters, Green and Regular Conformation Hunter and Performance Hunters divisions. His get have been successful in the jumper ring as well. They have also demonstrated their rideability by being successful in the amateur and junior divisions. Ragtime offspring have become very competitive equitation/medal horses.

REGAZZONI – Ragtime’s sire Regazzoni has successfully competed in the dressage ring winning the 1996 Finals of the German 5 Year-Old Dressage Competition. His grandsire Rubinstein, after not being impressive as a young colt, grew to be a top competitor in dressage. He also has produced many winning progeny. Grande, his dam’s sire,
has produced the best performance bloodline in the world. His progeny have excelled both in show jumping and dressage. He is one of the few stallions granted retirement until he died at age 30. Ragtime’s pedigree combines the A-line, D-line, F-line, G-line and R-line into one great sporthorse.

Born in 1991, Regazzoni’s royal lineage precluded him to achieve great success as a stallion. In 1994, Regazzoni won his stallion performance test with an impressive score of 152 for rideability. He received the optimum score of 10.0 for temperament and rideability. In 1995 he was Federal Vice-Champion German riding horse in Warendorf and in 1996 he won the finals of the German five-year old dressage championships.

RUBINSTEIN – Though born into a Dressage royal family, Rubinstein did not start off on such grand beginnings. He was denied approval by the Westphalian Board. He silenced his harshest critics by placing third in his performance test at Adelheidsdorf, placing 4th in jumping and 5th in dressage. Rubinstein placed ten out of eleven starts at S-level, an amazing feat. In 1995, he scored eleven firsts and seconds at the Grand Prix and Grand Prix Special Level. In 2000, Rubinstein passed, but his progeny has graced us with reminders of his grace and athleticism.

GRANDE – The G-line of Hanoverians based on Goldschaum xx is world renowned as a producer of top performance horses. Grande was famous for his good mind, and a strong, supple back, well-muscled hind end, good front action, freedom of the shoulder and athletic versatility. Grande was the first and, to date, only stallion whom the stud administration of Lower Saxony put out to grass. He spent two years enjoying his casual lifestyle before he